if you live in the upper midwest of the United States, near the great lakes, you know that lake superior is shaped like the head of a wolf.  and if you travel to the very tip of that wolf’s nose, you would be in duluth, minnesota.  but standing on the shore of the lake in duluth you hardly feel like you are anywhere so small as a nose.  you can’t help but be aware that you are on the edge of something vast and great and powerful. the beach is soft sand and the lake looks as endless as an ocean.  the difference is that more often than not you are alone or nearly alone.

as a teenager, I threw more than my fair share of emotions into its deep, dark, cold waters (yay..accepted into college!! boo…first big break-up.).  it’s breathtaking and mysterious and has inspired whole communities of artists, architects and musicians to set up camp.

but sometimes I think there can be something menacing about the lake and its powerful but stoic response to everything. or maybe it is just that the lake itself isn’t always enough.  either way, the towns that dot up and along the lake’s shore are the home to lots of kids with mental health and chemical dependency troubles.  it seems like everyone, including me, has been touched by this problem…sometimes in tragic ways and sometimes in triumphant ones.

and that is why I’m so excited to be involved in a new development in my hometown.  the powerful force that is my mother has been working tirelessly to raise $6 million and build a children’s mental health center called Amberwing in a beautiful wooded area of Duluth that will serve the surrounding area.  the facility is thoughtfully designed to provide mental health resources with innovative programs including art, drama, music, yoga and animal-assisted therapies.  there is a great new report about it here, (it is worth watching to see just how beautiful and thoughtful the facility will be).   part of the fundraising for services at Amberwing is a black tie event coming up at the end of the month called Artcetera with music, wine, and an auction. 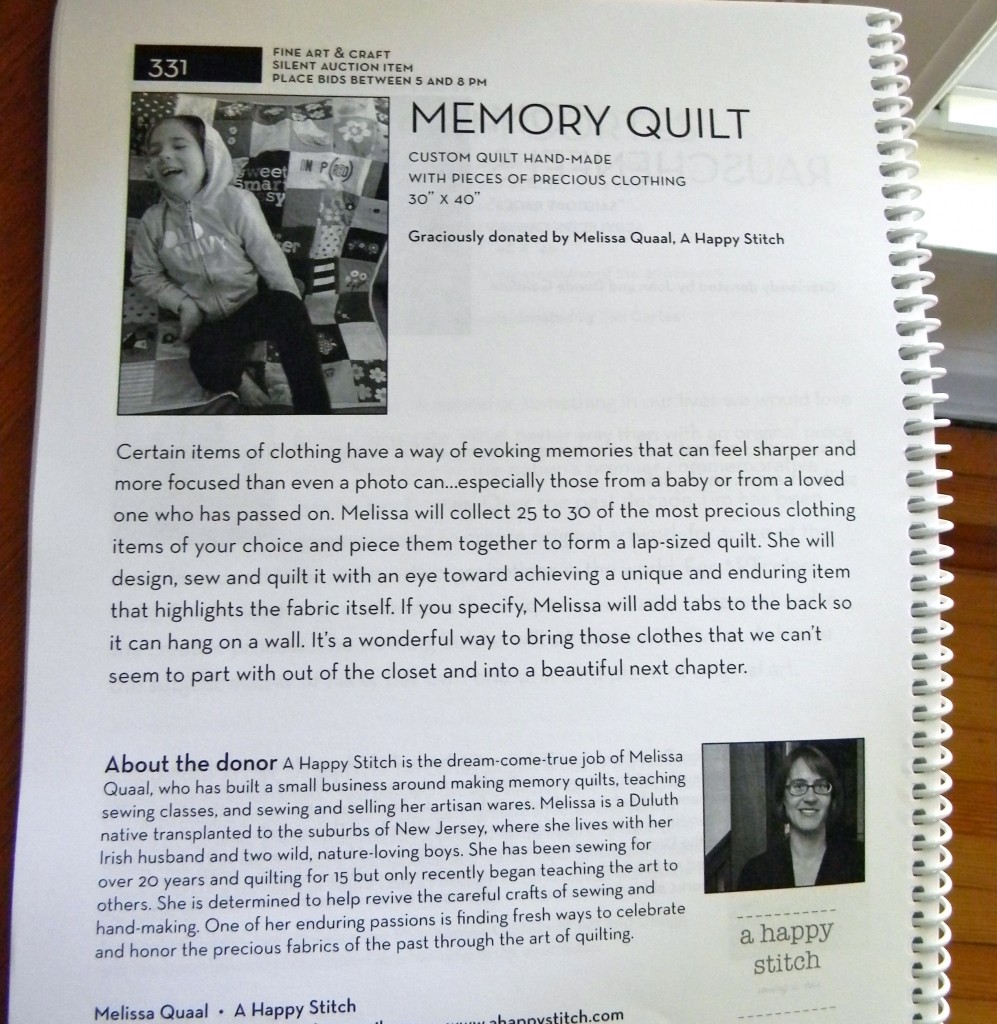 and, right there on page 331 is my donation of a memory quilt.   I’m so honored to have thrown my lot in with so many other area artists and craftsmen and I can’t wait to get sewing for such a good cause!

the whole thing got me thinking about craft-ivism (you know craft-activism) and the many ways that crafters can play a unique and heartfelt role in philanthropy.  then a friend wrote about her craft-ivism efforts and I decided to start a pinterest board to keep track of any opportunities I came across.  so, if you can make a pillowcase or a quilt, go check that out!