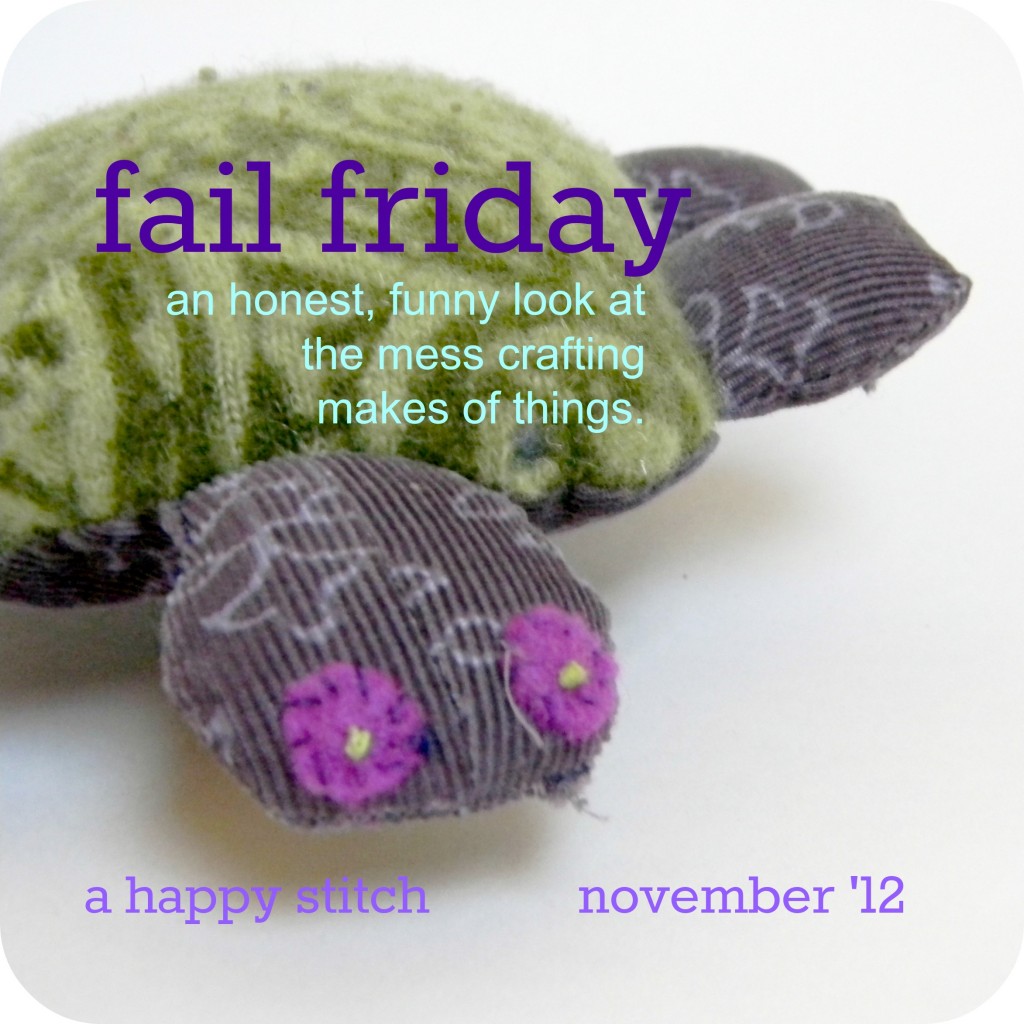 welcome to another fail friday!  fail friday is a series of posts showcasing and celebrating sewing and crafting failures.  why? because life is messy and so is crafting and the more honest we can be about that, the happier we can stitch…and learn and laugh and embrace our imperfections.

the wound is the place where the light enters you.~rumi

this week, I am truly pickled to have the prolific and uber-talented Abby Glassenberg of Abby Glassenberg Design as a guest post-er.  Abby Glassenberg is a plush pattern designer, craft book author, and sewing teacher. her new book on soft toy design will be published by Lark Crafts in May of 2013. visit Abby’s inspiring blog while she naps and her online shop, you will not regret it!  Abby is not only an amazing sewer (her soft toys literally boggle my mind) but her blog is filled with her optimistic, no-nonsense approach to the sewing and crafting business…so much so that I often feel the subtext of her conversations read “you can do this, too”!  she is honest about the trials and not afraid to dig into the nitty gritty.  and, her guest post here today is no different.  rather than dive into a specific ‘fail’ Abby is looking at the bigger picture, the great opportunity of a failure and the growth it affords.  welcome Abby! 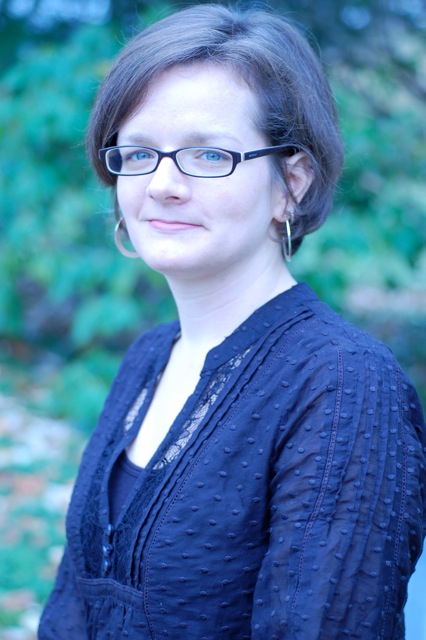 Breathing Room: How Failure Can Make Your Ideas Stronger

There’ve been days when I’ve checked my email compulsively, waiting for an important person to get back to me with a “yes” or a “no.” Yes, we love your idea and we’d like to work with you to make it happen! No, I’m sorry, what you’re proposing just won’t work. Those are very long days and when they end with a “no” the sting can last much longer.

But sometimes that “no” does me a big favor. Sometimes when an idea fails you are actually being given a gift. It can be very hard to see it in the moment, but rejection can create a space between you and your idea that is incredibly valuable. In that space you can rethink, start again, hone in on the core, and emerge with something sharper, tighter, something ready to go out into the world and succeed. 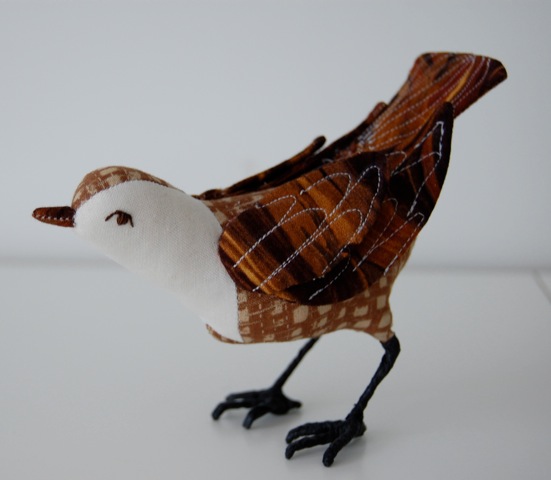 In May of 2009 I was out for date night with my husband. It was raining. We’d gotten some dinner and were at Barnes and Noble browsing through books (to be at a bookstore without our kids is really heavenly and a worthy date night activity for sure). I headed to the craft book section to scour the shelves for softie books and then we sat at a table at Starbucks, sipping coffee and watching the rain. I mentioned to Charlie that the book I was searching for didn’t seem to exist anywhere. I’d been designing my own patterns for stuffed animals and I wanted a book that would guide me through that process, a book that would take patterns apart and explain the “why” and the “how.” I wanted a guide to soft toy design but there didn’t seem to be one. 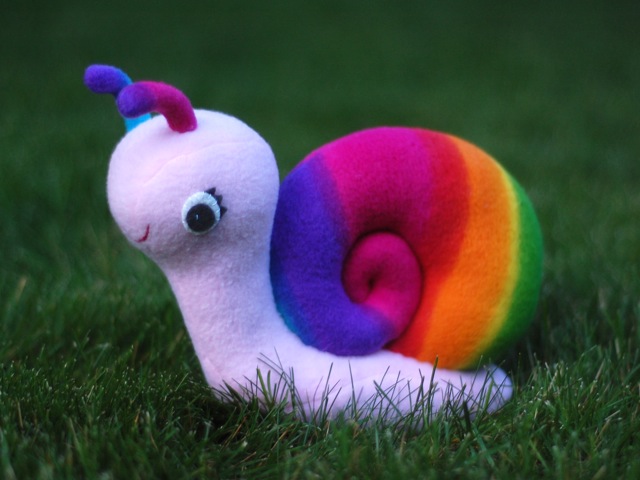 I did some online searching back at home with no luck. And then all of a sudden I knew that I needed to be the one to write this book. There was a rush of excitement and sudden urgency to get the idea out of my mind and onto paper. I Googled “how to write a book proposal” and I began researching publishers. I spent the spring writing. I created a table of contents. I sewed toys and wrote sample chapters. The idea got bigger and bigger. It was huge and complex and, oh my gosh I needed to make it happen! But I was becoming totally overwhelmed by it, too.

On a Tuesday morning in June I emailed my proposal to six publishers. A half hour after hitting “send” the phone rang and it was the Acquisitions Editor at Interweave. I nearly fell off my chair. Most publishers spell out clearly in their submissions guidelines that you should expect wait eight months before hearing from them, not a half hour. I felt like I was flying. Over the next few weeks I heard from five of the six. I felt totally validated. I knew this was a good idea and it seemed that they did, too.

At the same time I knew that if they said yes, if they accepted my proposal, I’d have to actually write this book, this huge, complicated book. The prospect had my stomach in knots.

And then Interweave called back and told me that they’d had a meeting and had come to the conclusuion that my proposal was too complicated. They didn’t want it after all. But they did want a book of my bird patterns. Could we do that instead?

Instantly I felt this huge surge of relief because they were totally right. The book as it stood in that proposal was too complicated. It involved multiple contributors. It spanned both soft sculpture and soft toys. It was way too big. A book of birds, on the other hand, was so easy! I already had almost a dozen bird patterns. Ten minutes after the call I’d already drafted a table of contents. Even when the other publishers came back to me and said they’d like to do my original idea, I turned them down. One even offered to sign me to a two book deal with the soft toy design book first and the bird book second. I turned them down. I was doing a book of birds. Whew.

That rejection was the biggest favor anyone has ever done for me professionally. I never let go of my first idea, but failing to get it published right away gave me the time and space to develop my skills, to learn about publishing, to become more confident in my vision.

The Artful Bird came out in January of 2011 (a month after I gave birth to our third daughter) and I sent out a fresh proposal for a book on soft toy design in February. This time my proposal was super tight. I had done a series of blog posts on soft toy design and gotten amazing feedback so I could prove without a doubt that this book would have an audience, but more importantly those posts helped me prove to myself that I was capable of creating it. I’d been through the book writing process already. I knew what I wanted and I knew what was ahead of me. Writing the Artful Bird readied me to make the book that I originally set out to write: a book on soft toy design. A book that I am forever grateful was rejected the first time around. 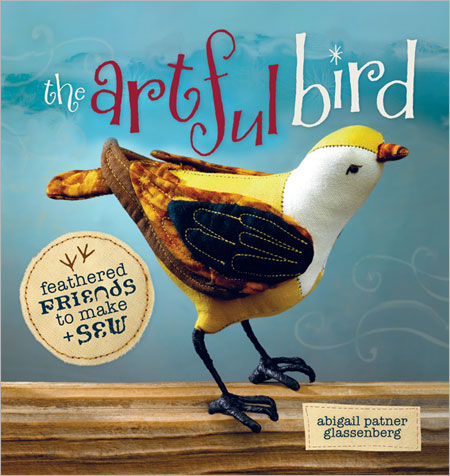 Sometimes rejection is just rejection. The idea blooms and dies. But sometimes rejection is a gift. After the wound heals, take another look at the original idea. If it’s still important, revisit and revise. Use the breathing room that the “no” provides to create something that will lead to a “yes.”

thank you Abby! great advice as we head into the sometimes treacherous waters of holiday making.   I’m willing to take some breathing room, for sure.  don’t forget to add your fail to the flickr group…perhaps we can all bloom together!