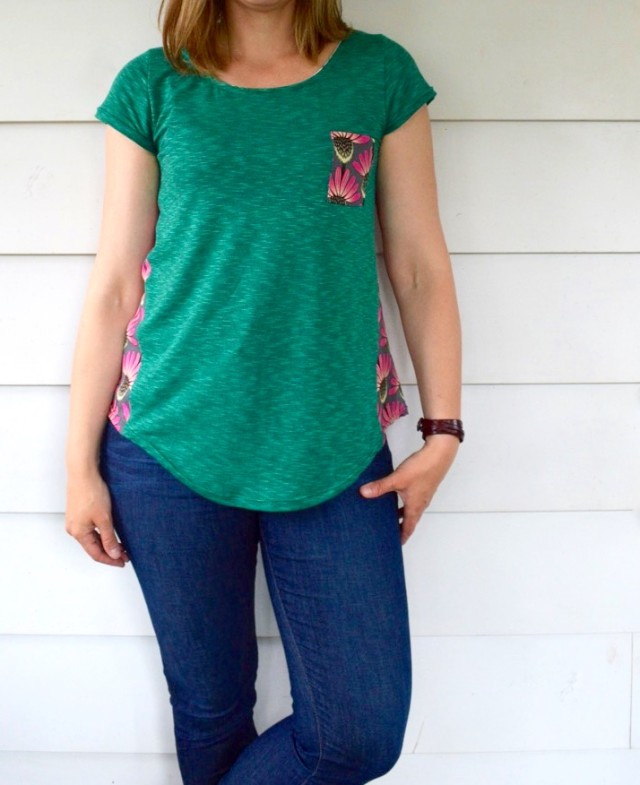 This is the pattern hack that tells a story.  The story is about how a small change here and small change there can give life to a whole new idea and build the confidence it takes to try out the totally crazy thing you’ve been thinking about doing all along.  As you know, I’ve been adapting/tweaking/altering the wonderful (and free!) Plantain Tee pattern from Deer and Doe. As I was working away, I had this little idea in my mind about trying to imitate a store-bought top in my closet.  Ok fine. It’s an Anthropologie shirt. 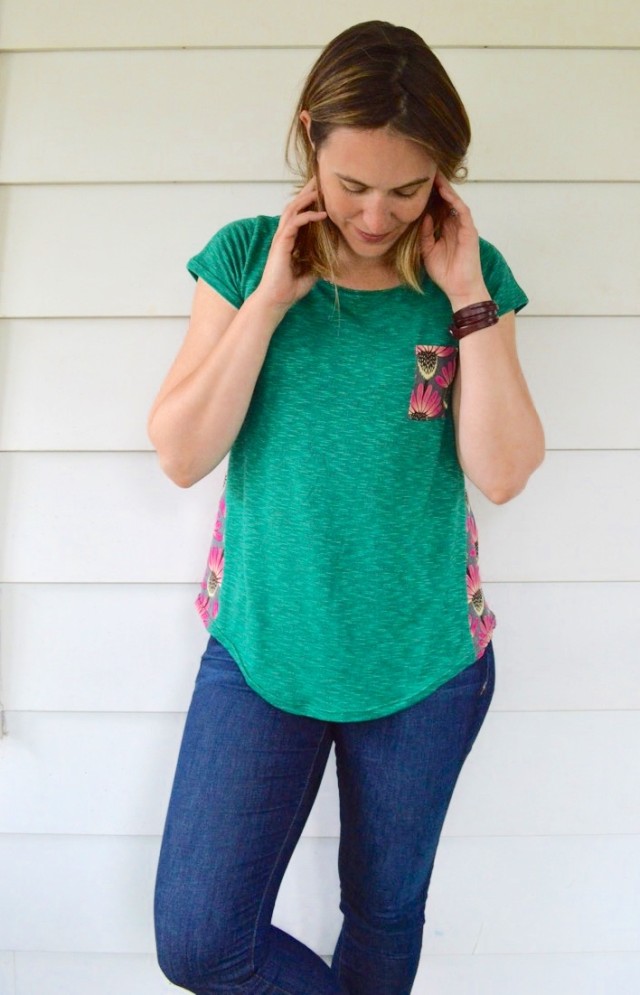 I love the way this particular Anthro top mixes both knit and rayon. I love its tiny pocket.  I love that the side seams rolls a bit to the front so the rayon design is visible.  I like that the neckline is semi-boatneck and that it has a loose fit. I wanted all of those features but I also wanted it a little longer and with a curved hemline.  So, I took everything I learned in the process of earlier tweaks on the Plantain and tried to make it on my own.  My first attempt was too tight and too short and a sad excuse for a top, to be honest.  But this one, well…it worked!! 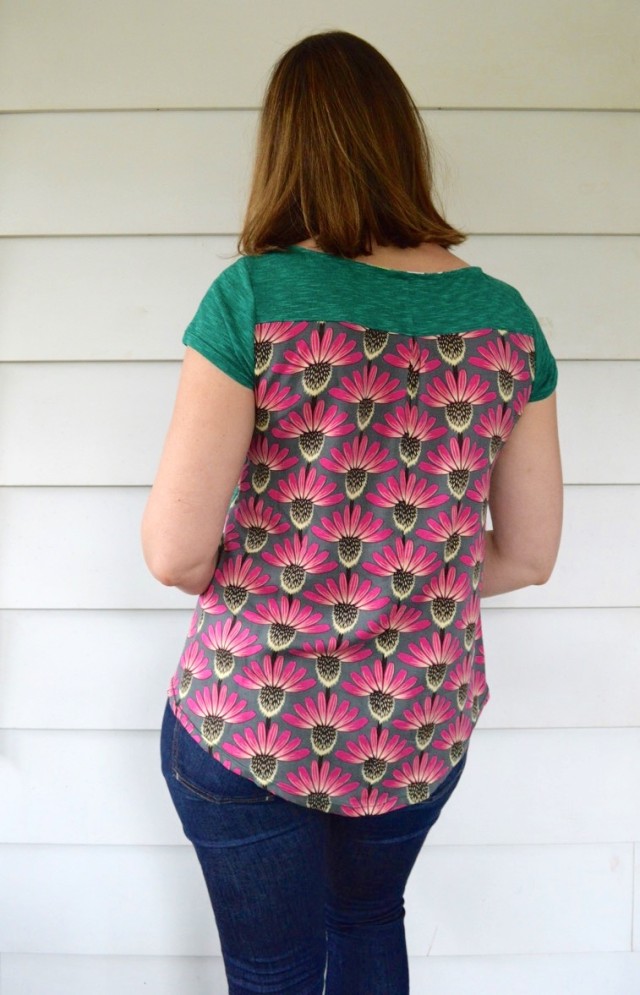 For my modifications I had to go all out. 1. The neckline was raised about 1.5″ in the middle and smoothed out to create a more boatneck line. 2. I divided the back of the shirt to create a yoke (adding 1/2″ seam allowance to the top yoke splitting it at about halfway along the sleeve). 3. For the bottom of the back I added in 1.25″ to the width so I could create a pleat. 4. I also swung the side seam toward the front of the shirt by 4″ and created a smooth line so the seam gradually disappears back to the standard position. 5. I had to remove a corresponding amount from the front of the top so the seams fit together. 6. Finally, I lengthened the top by around 3″ at the midway point of the front and back and created a curved hemline to meet up with that length.  I totally had to wing it on the pocket size, just estimating and trying out a good size.

I was so excited I made a second one: 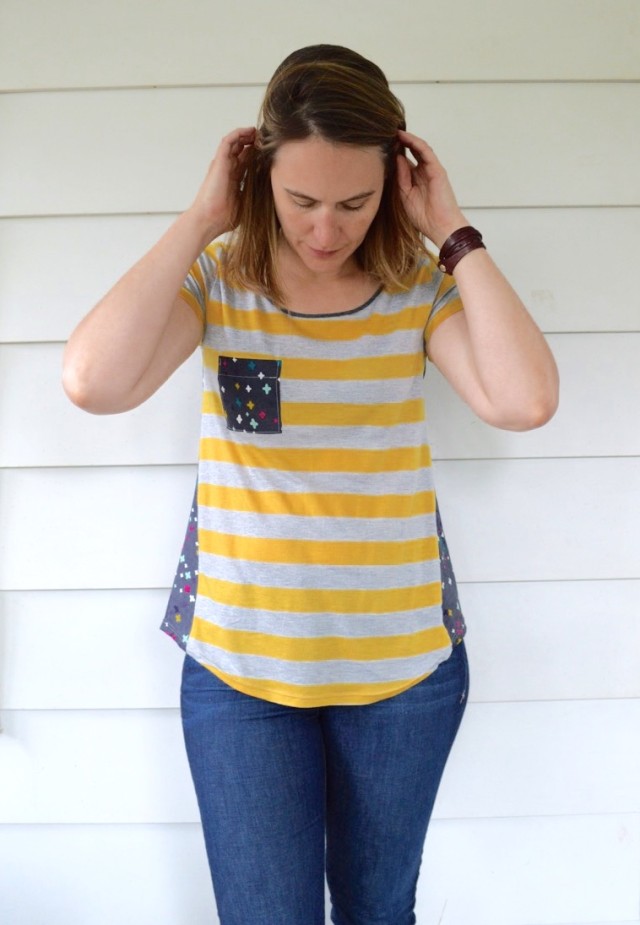 For this one I reduced the amount of length in the front and back so it was a bit less dramatic and replaced the rayon fabric with a voile.

The best part of both of these tops is that in addition to be super wearable, they were made entirely with used clothing and scrap fabric!  The knit fabric for both of them came from large sized shirts from Goodwill and the voile was old school Cloud 9 Fabrics leftovers from an earlier project. The Anna Maria Horner rayon (which, yes, is upside down, but that is the only way it would work and I was playing around so I went for it!) was scraps given to me from a friend. 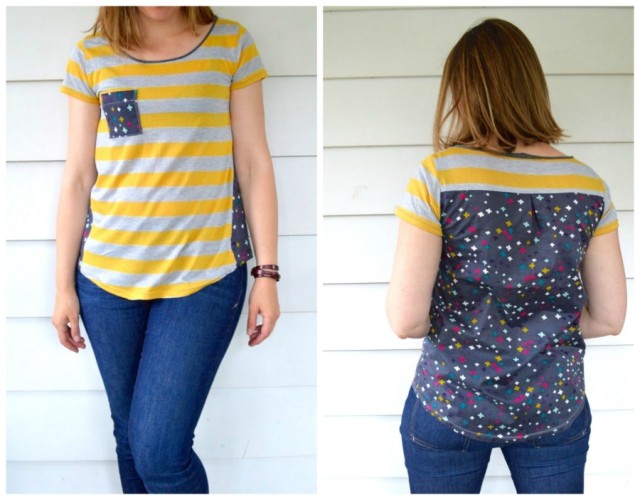 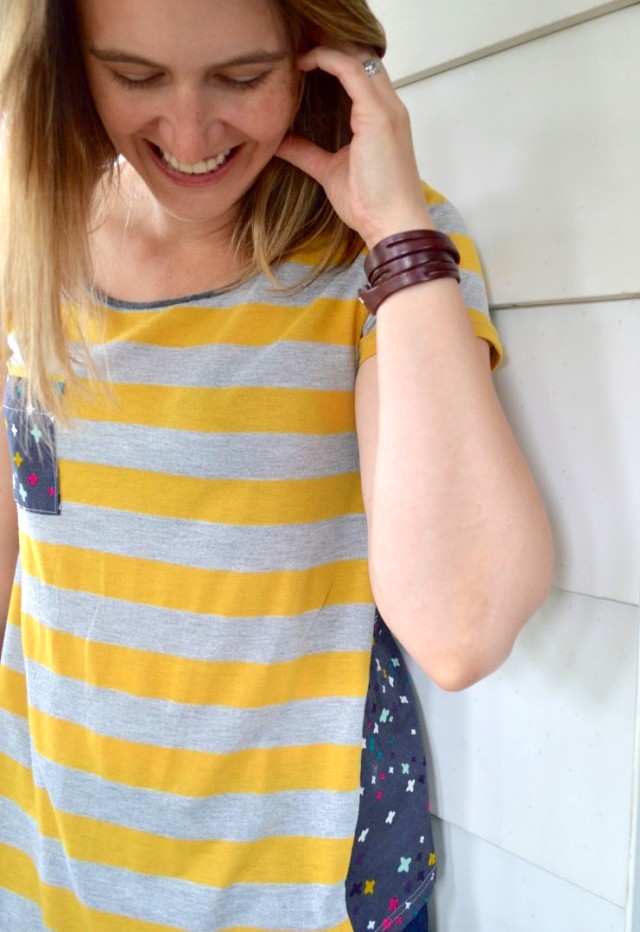 I would actually like to make more of these tops but I’m just not sure how many one woman’s wardrobe can sustain! It’s just so much fun to mix and match and create something totally original.  These tops are a complete pattern hack success!!

P.s. excuse the grainy photos! Something is up with my camera these days.  Harrumph.