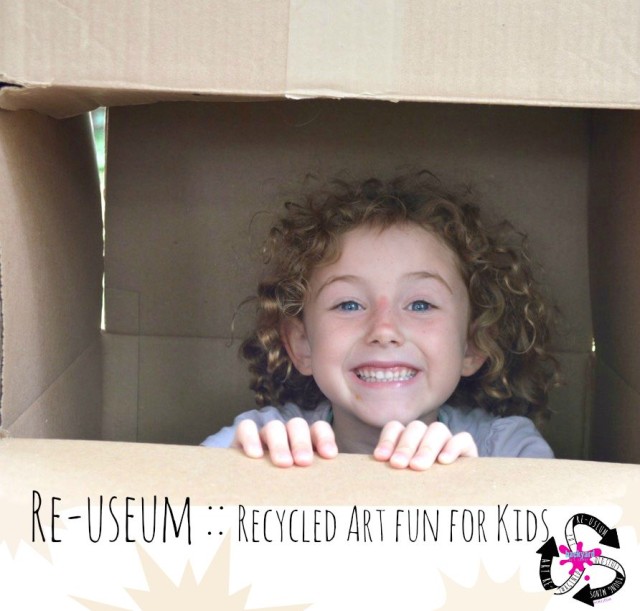 Oh my goodness, guys.  I have been waiting all week to share this with you and I’m just giddy with excitement.  Last Saturday morning we invited a few friends over and along with loads of cardboard and art supplies we turned our yard into a creation frenzy. It was our Re-useum party (Jane held her amazing reuseum party earlier to kickoff backyard art camp).  Here are the kids before we started.  Look at those cute faces!! 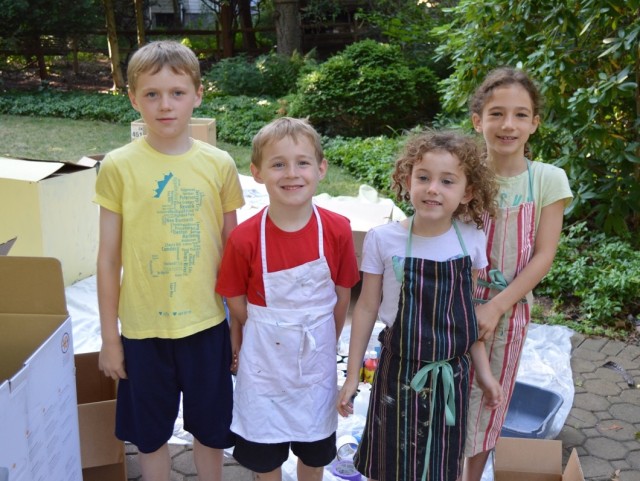 Our boys are such crazy balls of constant energy that I knew our Re-useum (recycled material art project party) was going to have to be big-scale and encourage motion and movement and action or they wouldn’t get into it. Plus, we were doing it outside and whenever we are outside there is always a threat they will start playing soccer and drop out of any other activity.  So, the Reuseum had to be engaging and physical and AWESOME. You know, no pressure.

We moved recently and had acquired so many cardboard boxes in the process.  We also ended up with a basement room full of old paint (so much OLD paint!!).  As Jane and I were discussing our plans she suggested I use all of that stuff for the reuseum. She’s so clever like that.  So, I hauled out old curtains and mattress bags as drop cloths, pulled out the old paint from the basement and filled the yard with our boxes. 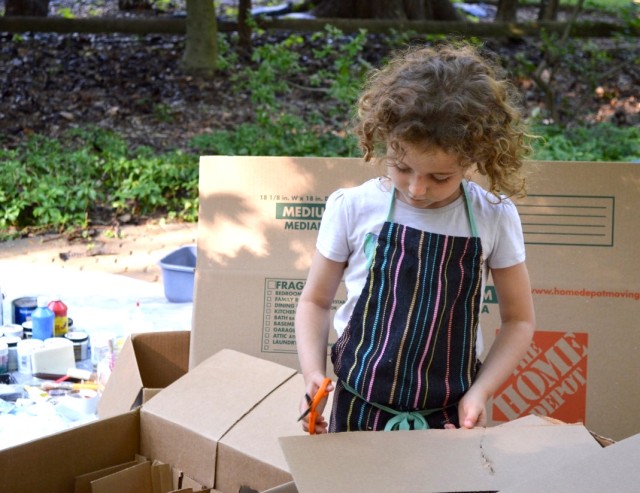 I didn’t give the kids any instructions except to say that we were going to make things for two hours and then pull it into an art museum.  In line with my child-led approach I put out the invitation and sat aside to let the magic happen. They got right to it.  The thrill of working with such big objects and REAL paint was so darn exciting for them! 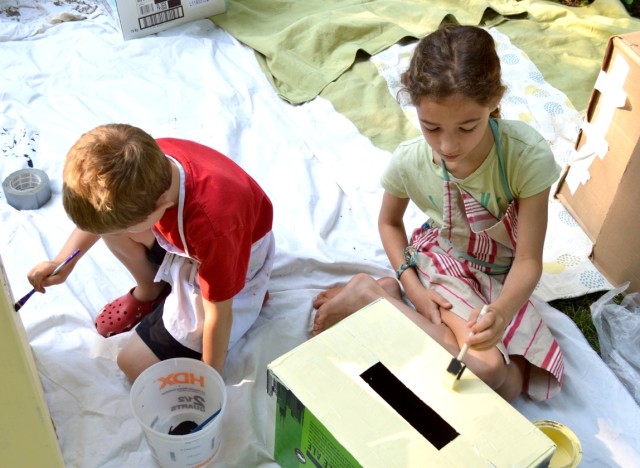 Watching this evolve was so interesting.  The kids started painting and making and then decided, as a group, to take all the little things they made into houses.  Pretty soon they were duct-taping boxes on top of boxes and trying to cut out windows and doors.  I had to step in as “door-cutter” because it required pretty serious scissors. Pretty soon I was cutting windows and even skylights (kids these days!). 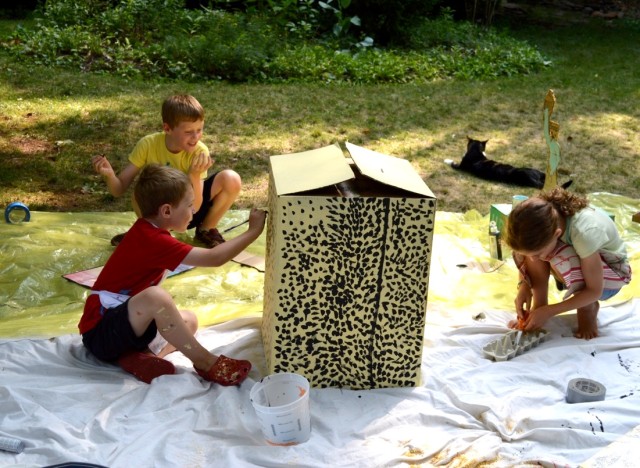 We were joined by the neighborhood cat who apparently can’t pass up on complete chaos.  Her owner wandered over later trying to figure out why Simon the cat was covered in glitter.  She saw what we were doing and just said, “Well, that explains it.”  Sorry Simon but you really shouldn’t rub up against a glitter-covered box before the glue dries! Silly cat. 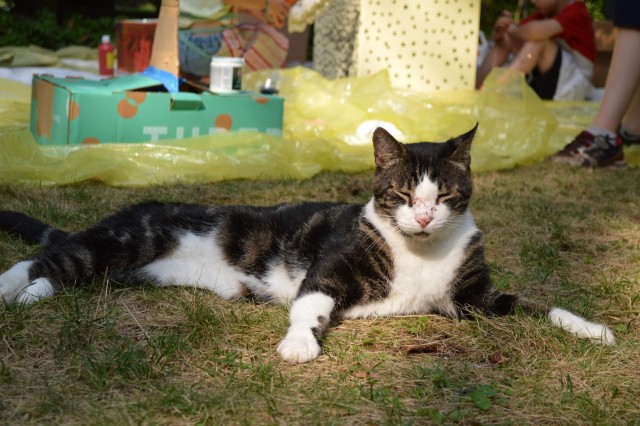 After two hours the kids had all built their own cardboard homes and arranged them in a ‘neighborhood’ and named it Cardboard Valley.  This was not the art gallery arrangement I was planning on. It was far, far better.  Instead of presenting a recycled art museum they played neighborhood.  In addition to a home, one building became a bakery, another a cheetah home, another a house with a Statue of Liberty statuette. 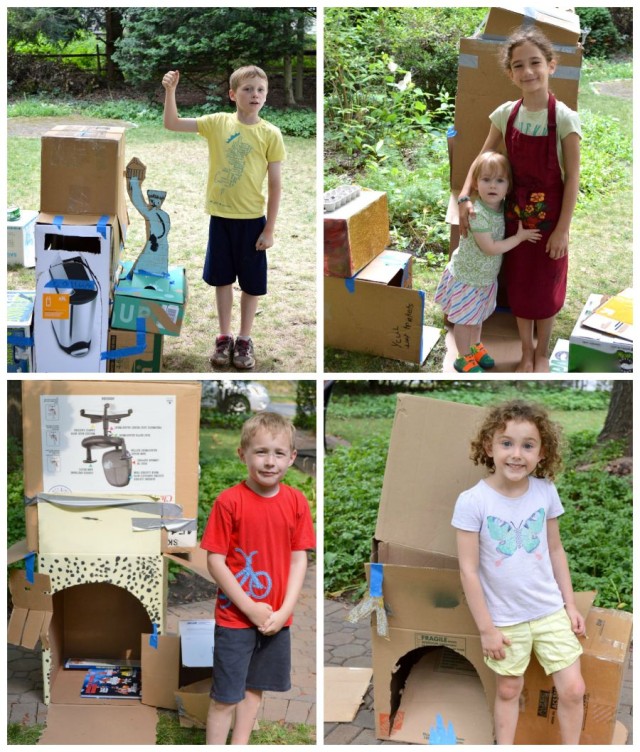 For the next hour and a half these homes became a hive of activity.  Things were added and taken away.  At one point, they were building grills to cook the food purchased at the bakery.  A menu was created for ordering at the bakery, books were brought outside and put into the cheetah house for guests to read…it was so imaginative and so much better than anything I could have ever planned. 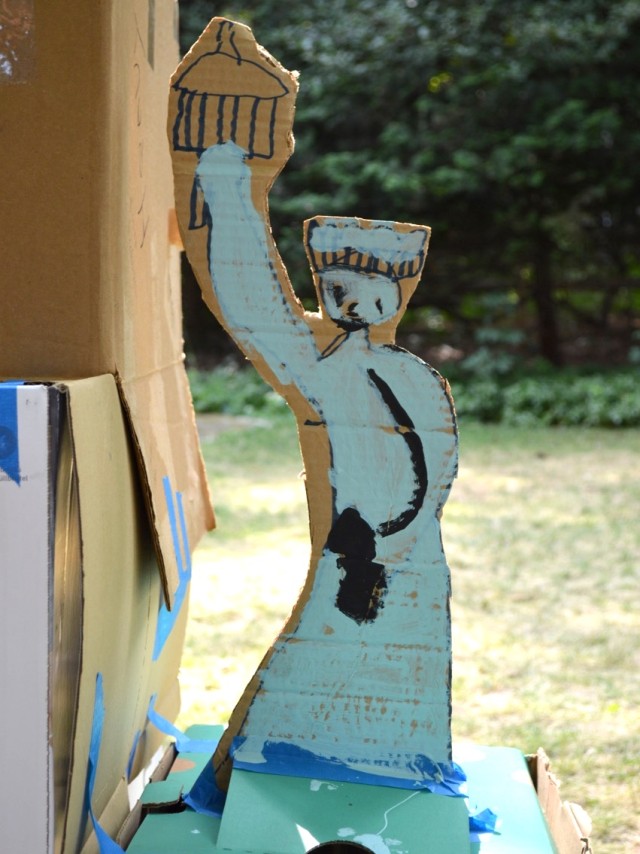 Simon the cat even played along, wandering in and out of Cardboard Valley like he owned the place. The kids didn’t want to stop playing and the boxes were quickly all used up.  Eventually our friends had to go home. 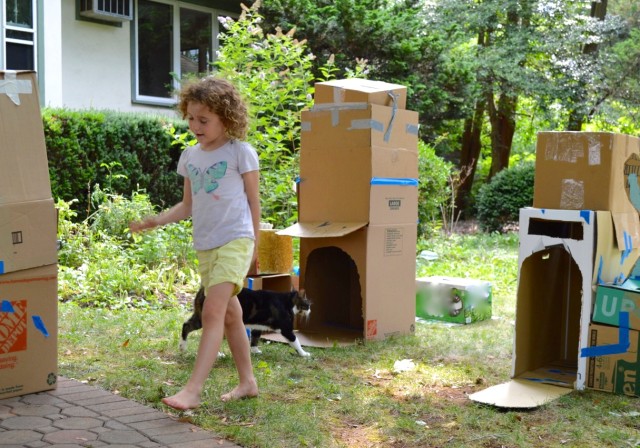 We had to drive their box homes over to their house in the trunk of our car because they couldn’t bear to live without them and only one fit in their car.  There were lots of parting hugs and breathless plan-making.  For my part, I don’t think I’ve had a better Saturday morning since I was a kid making mud pies.  Thank goodness Jane’s daughter Violet came up with such a great idea. 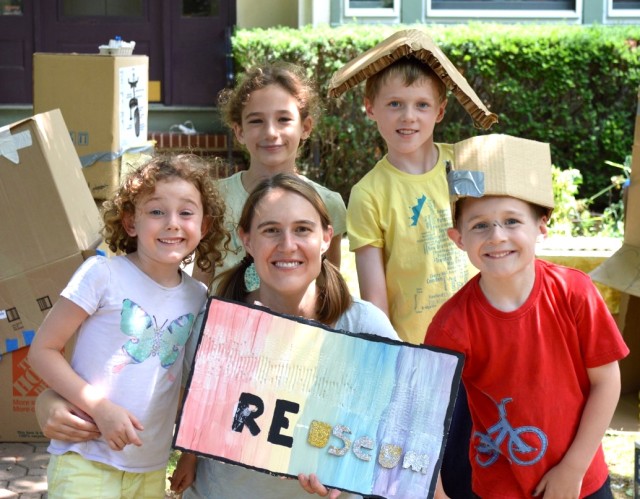 I can’t help but compare their faces.  They started out happy enough but minorly hesitant; by the end of the Re-useum their eyes are bright and lit and eager.  I could literally feel the difference.  Those cardboard hats up there are not worn with any self-consciousness or goofiness.  It’s pure, honest excitement.  Re-useum for the win!

All week long Jane and I have been saturated in encouraging creative kid art projects with recycled material.  Starting with Jane’s Re-useum party, my introspection on child-led art, Tara’s inspiring books, Jane’s incredible display of recycled art.  Why not get in on the fun yourselves and make something from reused materials, share it on Instagram and use #reuseum so we can see what you are making!  We would honestly LOVE to see it.  Spread the Re-useum goodness far and wide. I know school is coming up soon in many places but stretch out the summer a little more and expand little imaginative minds a wee bit more.